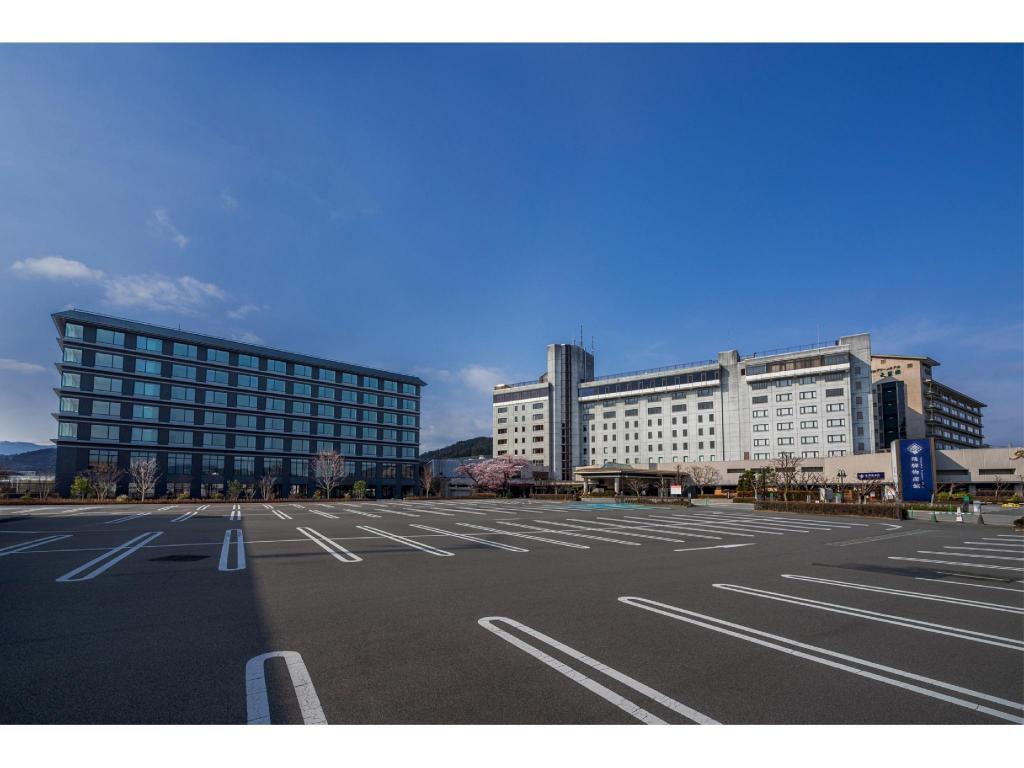 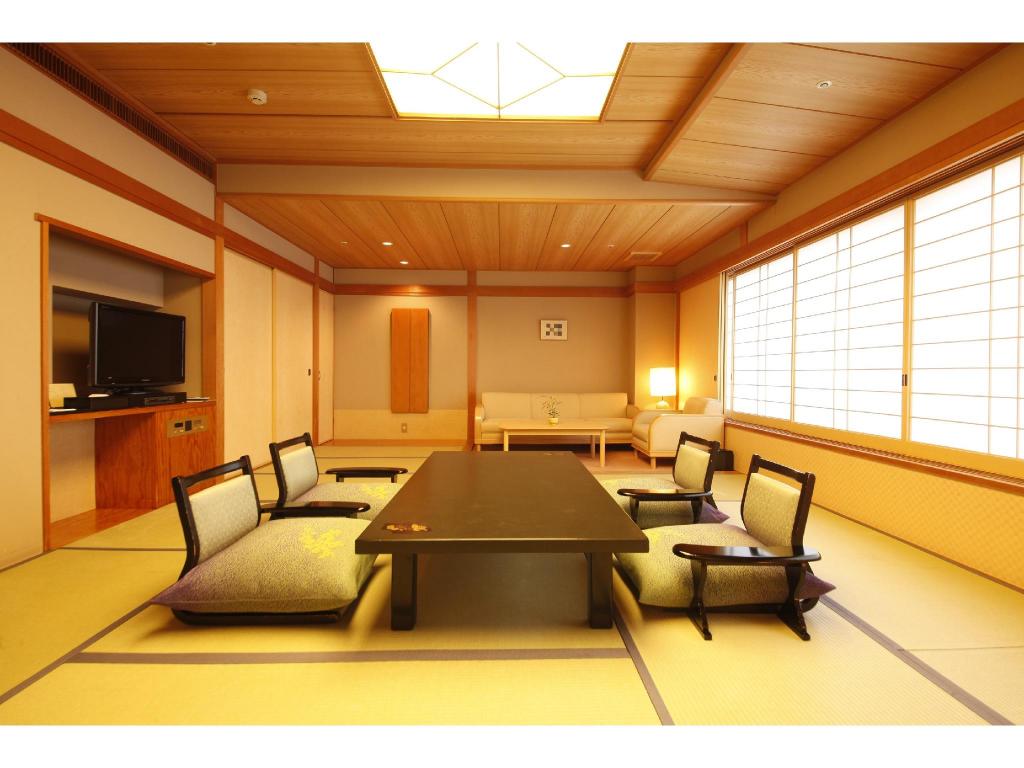 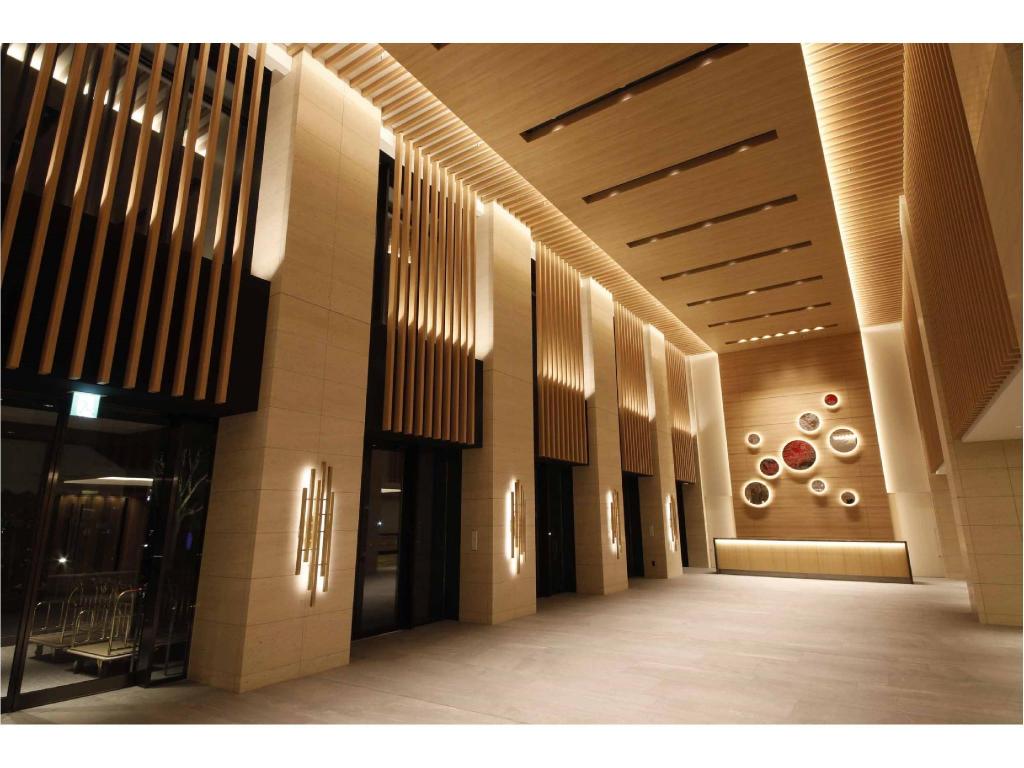 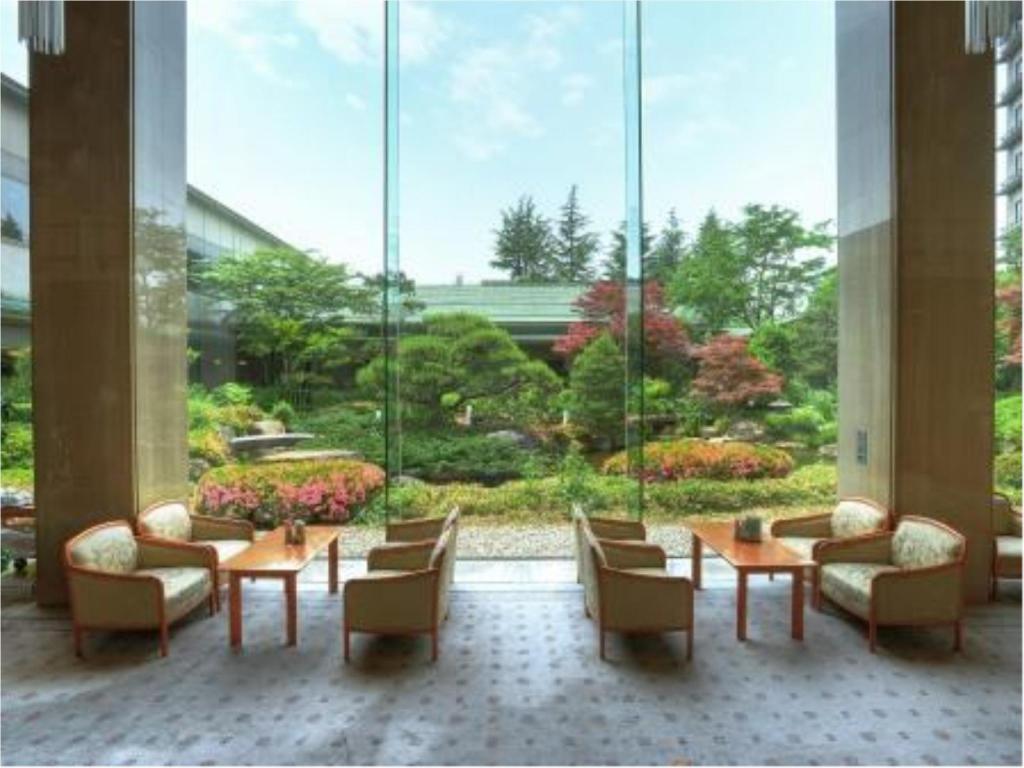 This large scale hotel is located in the city center of Hida Takayama and features 7 restaurants.
The hotel is equipped with a spacious large communal hot spring bath, 2 open-air baths, and the Hida Bussankan, a souvenir shop modeled after the Takayama Festival.

It is just 8 minutes on foot from JR Takayama Station and the Nohi Bus Center, and as there is a free shuttle bus running, it is also convenient as a base for sightseeing at Shirakawago.

For dinner, guests can select from 5 kinds of meals: Japanese cuisine, Western cuisine, Chinese cuisine, a buffet, and regional cuisine.

Hida Bussankan - Takayama’s greatest souvenir shop - not only sells souvenirs, but also features experiences for making your own sarubobo (a faceless, human-shaped doll) or frying up some senbei crackers.
The hotel features Lounge Kinoka, which looks out on a circuit style Japanese garden that harmonizes a world of elegance with the nature of Hida, as well as the Sky Bar which features a view of Takayama.

*Notice of Change to 1F Honjin Large Communal Baths Noon Service Days
Noon Service Days: Saturdays, Sundays, and holidays only
- Subject to change on long holidays, year-end/New Year, etc.
Noon Service Hours: 11:00-14:00
- Evening service (15:00-25:00) and morning service (5:00-10:00) will be for the Honjin large communal baths only, but as before, they will operate every day.

*Notice of Smoking Ban in Some Guestrooms
Effective 2020/1/24, some guestrooms will be non-smoking. Please ask lodging staff about smoking spaces.

*Notice of Main Building Renovation Work
Period: 2020/05/11-2021/10/31, Hours: 8:00-17:00 (scheduled)
Effects: Noise/vibrations may be noticeable when using the hotel 1st floor communal space. Scaffolding will be set up on the Main Building and construction using heavy machinery will be underway. Temporary passageway to front desk and lobby areas will be set up.
*Please check with the accommodation facility for details.

On busy days, the hall may be used as the breakfast venue. Depending on reservations, the dinner start time at each restaurant may be in 2 time slots. Slot 1: from 17:00 or 17:30; Slot 2: from 19:30)
Due to the effects of the novel coronavirus, the dinner and breakfast buffet service is suspended.
Applicable Days: Accommodations during the period of Apr. 1-28.
[Changes]
Dinner: buffet changed to prix fixe dinner
Breakfast: buffet changed to Japanese-style set meal, Western-style set meal, or Japanese/Western-style buffet
*Depending on infection status, the menu contents are subject to change, and will be decided upon by the lodging.
ย่อ

This time I selected to stay at Japanese Western-Style Room (Tenryokaku Wing), this room is very nice. There are 2 bottles of water in the guestroom. Public Hot Spring is very good both indoor and outdoor. Amenities in the guestroom is also very good. But

Hotel big and modern. The room was a little cramp for 3. Staff is courteous and speaks English. Food was good. Onsen was above average. Overall a 4star experience.

Room is very clean, food in Ryokutei restaurant is delicious. The service is great, they change restaurant for dinner as the previous day dinner were too traditional for us. Big hotel with nice souvenir shop.

Nice and big hotel with a welcoming lobby. Room is a bit small (We stayed in Western style room) but public spaces are spacious. Nice public onsen area, can accomodate lots of people at the same time. Quality of the food at buffet dinner/breakfast could be

overall hotel's ambience is quite dated. need some renovation to make it more modern

Good service although we were given a room on the smoking floor instead of non-smoking.

The hotel shuttle bus can be located at the back of Takayama Station i.e. turn left from the station exit. It is also quicker to walk to the hotel from the back of the station building rather than from the front.

great hotel with hot spring, many cititzens in the city will come to hot spring, but the hot spring is very spacy. no problem with capacity. Staff is very friedly. shuttel bus to the traditional streets and railway station. The food is very dilicious. My

great hotel with very friendly staff. Have enjoyed the time very. The hot spring is good. The food is cheap and delicious. Man must book room with breakfast and dinner. Especially the dinner. I get 0,5 kg every night stay ;-)

The Japanese western style room is bigger than others which we had stayed. Reservable open bath was a nice experience. Breakfast was yummy with a wide spread of japanese and western food. Hida beef kaiseki dinner was the highlight of the stay. It was s

Spacious hotel and big public bath. Quite a good selection of restaurants in the hotel. Atlhough it is not near station, the hotel provides a shuttle there regularly

The hot springs were great, a highlight of our visit. Had the Japanese taster meal and would highly recommend, lots of courses and got to try a bit of everything. Waitresses were very friendly and efficient.

We stayed one night in Takayama Green Hotel and had a great stay. Onsen is fantastic and enjoyed their Japanese style dinner with Hida beef and international breakfast. Highly recommended to all !

Enjoying the stay, love the food and friendly staff.

Eat all you want Hida Steak. It was great and quality consistent. Room is sizeable and the baths were plenty. There are shops around the hotel and the complimentary shuttle bus to and from the train station is really useful even though the hotel isn't very 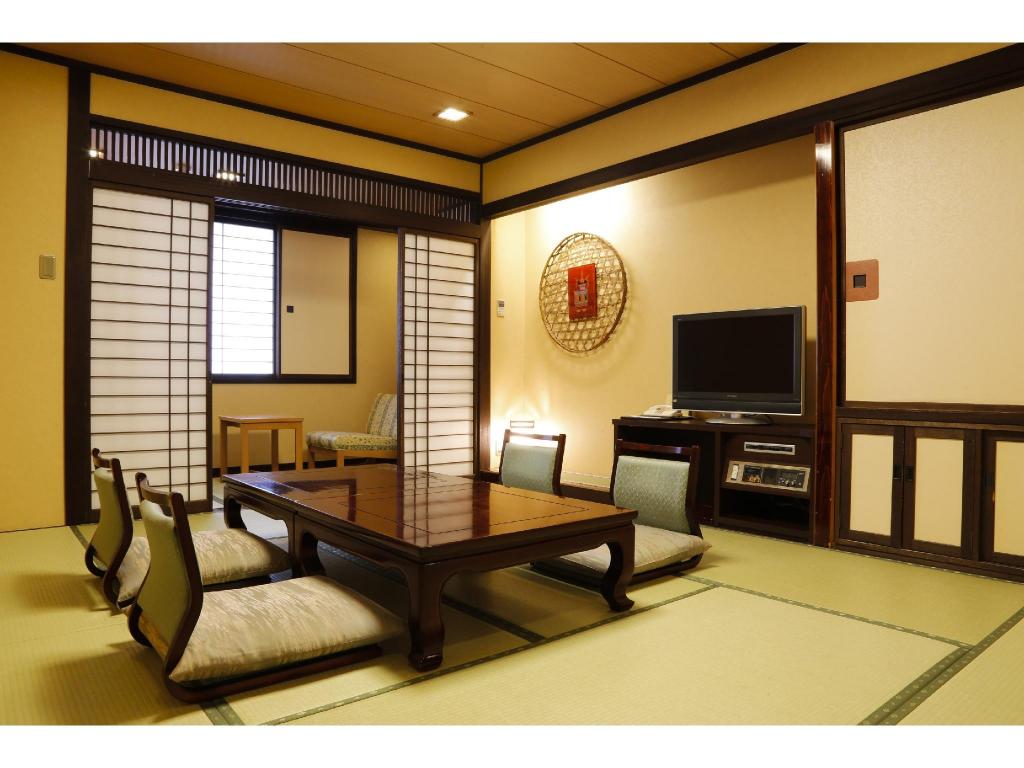 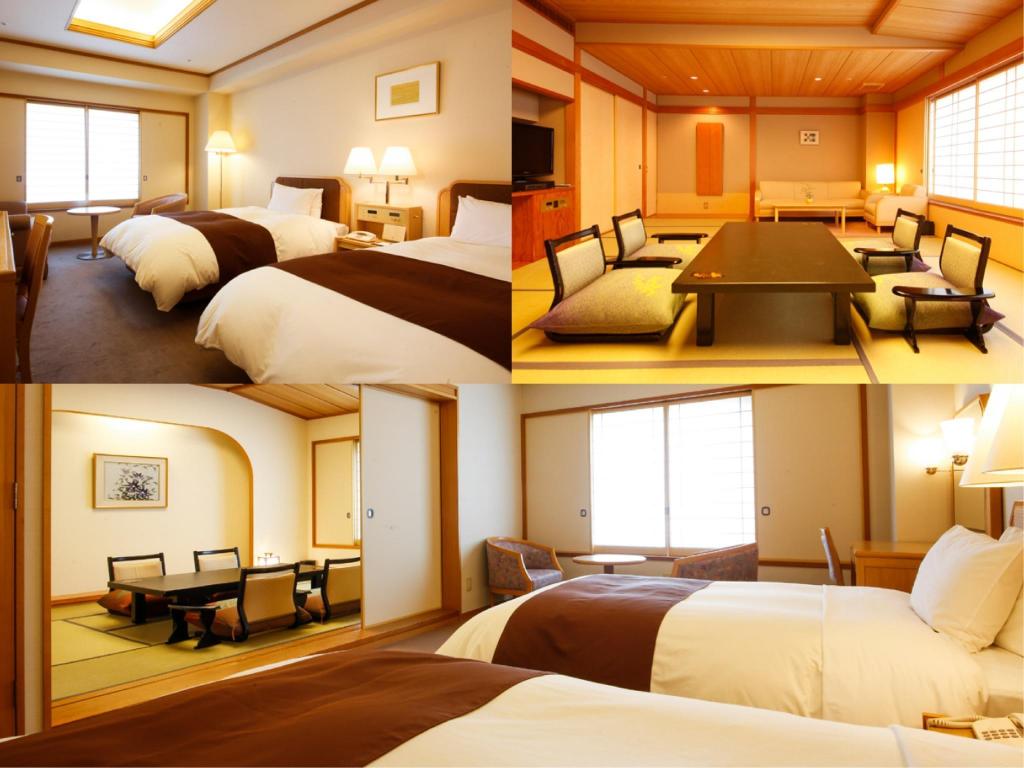